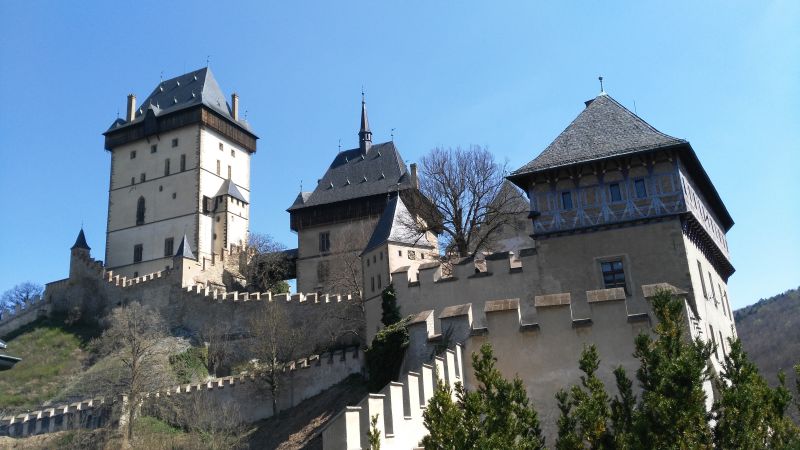 Karlstejn Castle tour represents a nice trip just outside Prague. The castle silhouette reflects a dream about a medieval castle with its typical main tower. The castle was known as a treasure for coronation jewels and since 19th century as a romantic place.

History and importance of Karlstejn Castle started in 14th century. Karlstejn was built as a private residence of the king Charles IV and named after him (Karel IV in Czech language). It was extended by other towers and used as a treasury for holy relics and for Crown jewels of the Holy Roman Empire, later for Bohemian Crown Jewels as well.

The best stories about Karlstejn always concern women. Karlstejn played the main role in the Czech movie “The Night at the Karlstejn” from 1973. A legend says it wasn’t allowed for a women to spent a night ther. The very romantic love story was made up a combination of Charles’s life and real life of his four wives.

The entire castle was rebuilt by the architect Josef Mocker at the turn of the 19th and 20th century into the purism style. The reconstruction was severely criticized and completely changed the original appearance of the castle. Nevertheless, this reconstruction created the typical architectural look of today Karlstejn.

You will visit and see this beautiful castle and listen the stories about it. You will admire the replica of St. Wenceslas Crown of Czech Kings, the collection of 129 panel paintings by Master Theodoric in the Chapel of St. Cross and the largest portrait gallery of Czech rulers in the country.