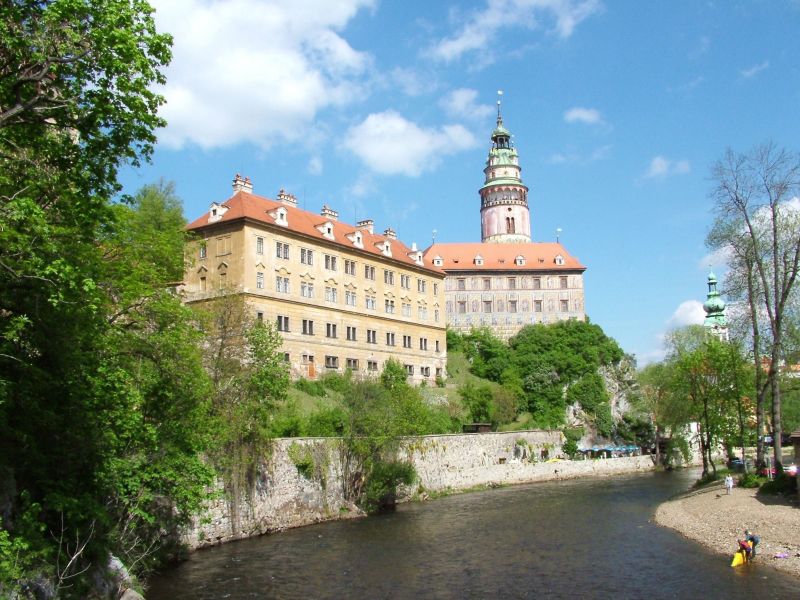 Cesky Krumlov is an ancient picturesque castle and very artistic town built in Italian style, situated on Vltava (Moldau) River. It is 2,5 hours driving from Prague, southern direction. This is why it is a very good stopover on the way to/from a River Cruise on Danube or on the way to/from Vienna or Salzburg. Cesky Krumlov is listed as UNESCO heritage site since 1992.

History of Cesky Krumlov started, according on archaeological findings, 35-50 thousands years ago. The oldest settlements in there was documented as the New Town (Neustadt) 14 thousands years ago. Celtic people lived there from 5th to 1th century B.C. Medieval history starts in late 12th century. Vitek from Prcice dominated this territory and split it into several parts in the ritual known as the Division of Roses. Named by roses, its coat of arms, the aristocratic family of the Rosenberg was born.

Architecture of Cesky Krumlov is impressive. The first mention about it as a seat of Rosenberg is from 1240. Gold times of Cesky Krumlov was during the reign of Lords of Rosenberg (1302 – 1602). The most known of Rosenberg’s, William Rosenberg, rebuilt the castle into a renaissance style in late 16th century. Cesky Krumlov was the place where Italian artists and foreign alchymists lived. The last member of Rosemberg family, Petr Vok, sold it to the emperor Rudolf II in 1601. Later on it was given to the Eggenberg family and afterwards inherited by the Schwarzenberg family (owners since 1719) . They added many baroque features.

You will visit the museum, you will walk through narrow cobblestone streets, between patrician houses. You can find there attractive exhibits, cosy coffee shops, ancient taverns, home made art products, 300 protected buildings in the historical centre designated as a UNESCO World Heritage Site, the second largest castle complex in the Czech Republic, and the oldest Baroque theatre in the world.