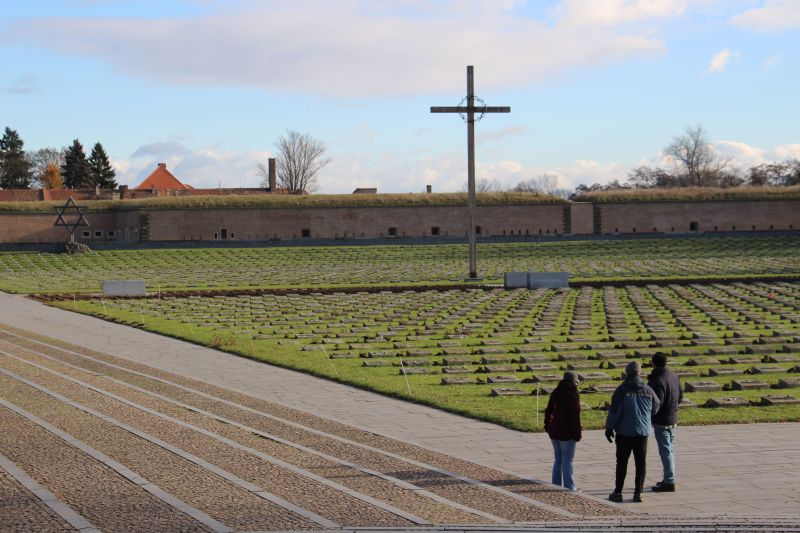 Terezin was an old military fortress established in 18th century. During WWII, it was rebuilt into a Ghetto for Jews from all over Europe. We need to commemorate WWII, especially in the context of today’s world events.

Emperor Charles VI. did not have a son. He knew, that his eldest daughter Maria Theresa would be the heir to the throne. In the times of Austrian-Prussia rivalry her son Joseph II. decided to build a fortress to defend the northern border of the Empire, naming it after his mother Theresienstadt/Theresa’s Town.

First it was used as military fortress and through the time it became a civilian town with a strong military presence. It consists of two parts, the Main and the Small Fortress.The Main Fortress it is the true heart of complex, which is where the civilians and soldiers lived together. The Small Fortress in the contrary has much darker history. The Habsburgs use it as a military and political prison.

After the Nazi division and occupation of Czechoslovakia in 1938/39 the Gestapo decided to create a political prison in the Small Fortress in June 1940. Just about a year after that, in October 1941 the SS Obergruppenführer and General of police Reynhard Heydrich gave his order to establish a transit concentration camp for Jews in the Main Fortress.

Terezin was also used in a lying Nazi propaganda, that Jewish camps were calm towns, where Jews live and work in peace. When you arrive, your first impression might be, that this is not a cruel labor or extermination camp, but a calm town. Nevertheless it is not true. The primary function of the Theresienstadt Ghetto was to collect Jews and transport them to the death camps. Total 63 transports and 87 thousand people were deported.

You will hear more about the history of Terezin. You will visit its two parts, called “Main Fortress” and “Small Fortress”. You will go through several objects and museum exhibitions describing suffering of Jewish people during the Nazi occupation. You will admire pictures, drawings and paintings created by people waiting there for their fate.